SEVEN SHIPS IN PRODUCTION – AT THE SAME TIME!

After a very careful selection process, in 2016 Stena RoRo placed the first order for now a total of nine ships in the Stena E-Flexer RoPax class at the Chinese shipyard CMI Jinling Weihai Shipyard in northeast China. All ships are based on the same hull, but have been adapted to different customers' wishes and needs.

At present, all of seven ships are in various stages of production. The first ship, the Stena Estrid, was delivered on November 15, and the last one under the current order is scheduled for completion in March of 2023.

Of the nine ships ordered, five will be delivered to Stena Line, three to Brittany Ferries and one to DFDS. The hull design, which is the same for all, has a hydrodynamically optimal design for the least possible water resistance. Also common to all vessels is the extensive use of digital functions and the latest environmental and energy-saving technology.  The vessels are tailored to customer needs. This entails among other things, that one is equipped with scrubbers, two are equipped for LNG operations, one has ice class 1A and two are to be delivered in an extended version. The DFDS vessel will be used as a day ferry on the Dover-Calais line and thus has no passenger cabins. For Brittany Ferries, longer voyages apply and the vessels are equipped with several cabins, sun decks and more restaurants. 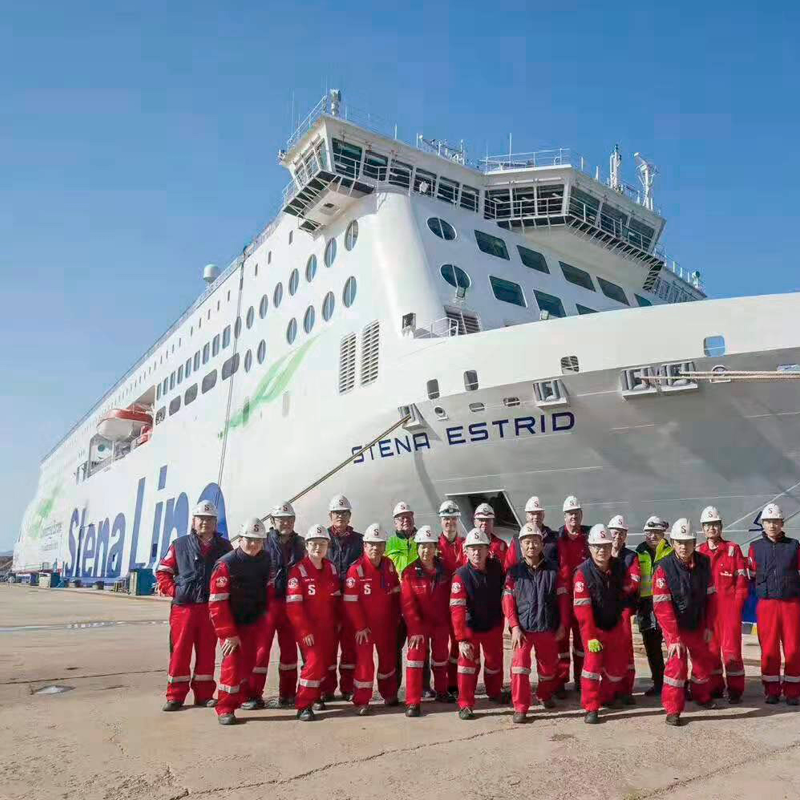 Stena RoRo's team in front of Stena Estrid at the shipyard in China.

“It’s the flexible design that enables considerable opportunities for customization, which is also what distinguishes the E-Flexer solution,” explains Magnus Lander, the project manager for Stena RoRo and who is on site in China at least one week each month. “This flexibility also entails several requirements regarding shipyard customization. As the project manager, much of what I do involves communications between Stena RoRo and the shipyard so that we actually get what we’ve ordered.”

“We enjoy excellent collaboration with the CMI shipyard, both in terms of development and production,” says Per Westling, CEO for Stena RoRo. “The vessels are characterized by very high standards in terms of technology and environmental performance, and we are very pleased with CMI’s performance in attaining the highest quality.”

On November 15, a ceremony was held at the CMI shipyard to mark the transfer of the Stena Estrid to Stena Line. Along with her sister ships the Stena Edda and the Stena Embla, she will provide service for Stena Line’s operations on the Irish Sea.

PICTURE AT THE TOP

Magnus Lander, Project Manager and Staffan Stenfelt, Newbuilding Manager in a gantry crane 60 metres above ground. If you look closely you can see five vessels in the photo: Stena Estrid (behind the mountain), Cote D ’Opale (blue section at the quay), Stena Edda (in the dock), Stena Embla (in the dock) and Galicia (at the far end of the dock).

SHARE THIS ARTICLE:
THANKS FOR READING THIS ARTICLE.
QUESTIONS OR SUGGESTIONS? GET IN TOUCH
TEXT Birgitta Plyhm    PHOTO Stena RoRo
Stena RoRo
December 12, 2019
POSTED BY: Stena

The COVID-19 pandemic is forcing companies to get creative. This autumn, Stena Logistics-owned company NMT International Shipping and Stena RoRo came up with a mutually beneficial solution to put a Stena RoRo vessel to good use on a route from Europe to Africa.

The sister ships Stena Lagan and Stena Mersey are being rebuilt by Stena RoRo at the Sedef shipyard in Turkey. The method used to increase the capacity of the vessels is extreme. In addition, the technology and interiors are being upgraded to the benefit of the customer, passengers and the environment.

The Galicia, the first of three ships in the E-Flexer class ordered by Brittany Ferries was delivered on September 3. The vessel is the third E-Flexer of nine ordered by Stena RoRo from the Chinese shipyard CMI Jinling (Weihai). The Galicia will be chartered by Brittany Ferries on a long-term basis and has been especially adapted to the wishes of the French ferry company.

Conversion of the former ferry Stena Superfast X is currently underway in Pireaus in Greece. The customer is the French shipping company Corsica Linea, which provides service on the Marseille — Corsica — North Africa route. Stena RoRo received the order in December and delivery is expected after a scant five months, as early as mid-June. The conversion includes a general freshening-up and adaptation of the interior, as well as repainting, expansion of the number of cabins and installation of hybrid scrubbers.

The Tianjin Xingang Shipyard in north-eastern China is building the Global Mercy – the world's largest civilian hospital ship. Heading the project is Stena RoRo, commissioned in 2014 by the international aid organisation Mercy Ships. The vessel has now been launched and the equipment phase with wiring, piping and interior fittings is underway. Stena RoRo has 16 employees at the shipyard to monitor the complex project.