The Tianjin Xingang Shipyard in north-eastern China is building the Global Mercy – the world's largest civilian hospital ship. Heading the project is Stena RoRo, commissioned in 2014 by the international aid organisation Mercy Ships. The vessel has now been launched and the equipment phase with wiring, piping and interior fittings is underway. Stena RoRo has 16 employees at the shipyard to monitor the complex project.

The Global Mercy is classified as a passenger vessel, designed for 500 passengers at sea and about 1,000 persons in port when used as a hospital. The ship is based on Stena RoRo’s RoPax concept Stena Seabird, and the flexibility of the concept will be particularly useful.

“Where there’s usually a car deck, we’re building a hospital with six fully equipped operating theatres,” says Per Westling, CEO for Stena RoRo. “The project is unique with extremely stringent demands on flexibility and quality, and it is a joint undertaking by several European and Asian companies. We have experienced personnel on site monitoring construction and we’re quite happy with the results to date. It feels good that we’ve been able to contribute with our expertise on a project this important.”

The equipment phase has now begun, initial painting both inside and outside has been completed and the ship can soon start its generators that will produce the necessary power both for propulsion and hospital equipment.

Left: Rikard Olsson, Project Manager, Stena RoRo and the team at the site in China. Right: Prototypes of physical environment enables tests of both appearance and functions at the 600m2 constructed mock-up.

“We’ve constructed a 600 m2, two-storey mock-up,” says Staffan Stenfelt, New-building Manager at Stena RoRo. “The prototypes of physical environments we’ve created enable us to see everything in detail, and we can check both appearance and functions before implementation onboard. If anything needs to be adjusted, this can be done early on.”

Mercy Ships has offered free medical care to the world’s most needy for more than 40 years. The present hospital ship, the Africa Mercy, is out ten months at a time, calling on ports along the African coast to provide medical and dental care. The ship has been in Dakar, Senegal since August. By training local personnel, help is also provided to the nations visited in building up their own medical capacity.

“With the new ship, we can more than double our assistance to the poorest of the poor with life-changing operations,” says Tomas Fransson, head of Mercy Ships’ Swedish organisation. “Our work is based on the efforts of volunteers, and once the Global Mercy is deployed, we’ll need twice as many as before. Although this naturally applies primarily to medical personnel, we also need people with many other skills, such as engineers and food service workers.”

The ship has space for 199 patients and more than 600 staff members. There are six operating theatres and the total area is about 30,000 m2. The Global Mercy is scheduled for completion in about one year. 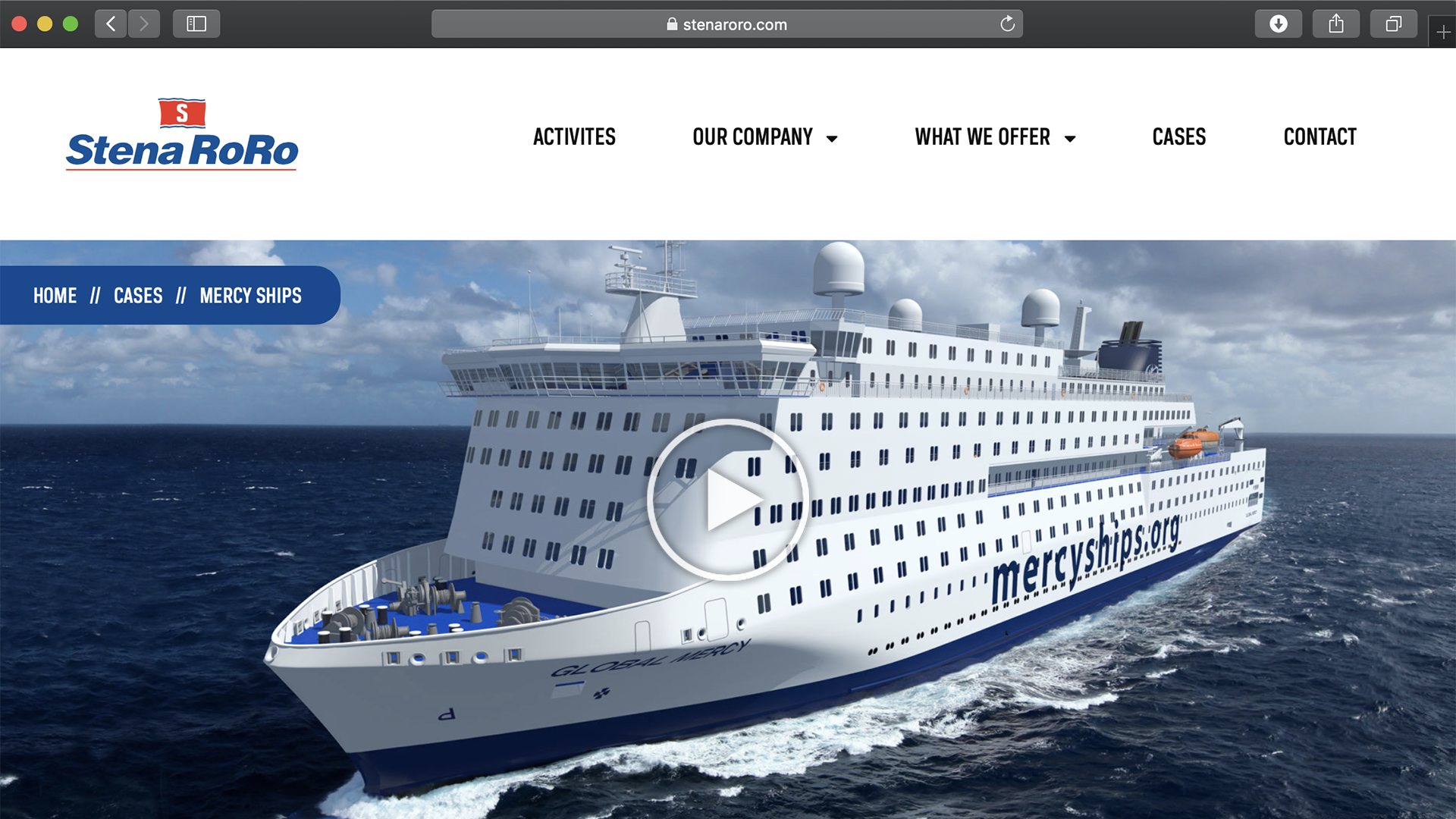 Read more and watch films about the building of Global Mercy here.

SHARE THIS ARTICLE:
THANKS FOR READING THIS ARTICLE.
QUESTIONS OR SUGGESTIONS? GET IN TOUCH
TEXT Birgitta Plyhm    PHOTO Stena RoRo
Stena RoRo
October 17, 2019
POSTED BY: Stena

Stena RoRo is collaborating with the American shipping and logistics group Crowley on a project for the purchase of ships for the United States Maritime Administration (MARAD). With the aid of Stena Bulk, Concordia Maritime has also recently signed a contract whereby Crowley is bareboat chartering the P-MAX vessel Stena Polaris.

“It is a tremendous advantage having our own office in Asia, especially in China,” says John Kollander, Chartering Manager for Stena RoRo globally and head of the company's Shanghai office. He highlights the position of StenaSphere and Stena RoRo as a driver of sustainability and a success factor in Asia.

Stacy Tao is the office administrator manager at Stena RoRo’s Shanghai office and says that the longer she works at Stena, the more she appreciates the values and culture. She especially stresses the importance of work with sustainability. Stacy is very committed to her job and has clear ambitions for the future – she is studying Swedish and would be happy to move to Gothenburg.

The conversion of the ferry Saga (formerly the Stena Saga) into an accommodation vessel has been completed over a two-month period in Piraeus, Greece and the vessel is now on its way to Manila in the Philippines. There she will be used for just over a year, among other things, for accommodations during the construction of Manila's new international airport.

The shipping company Crowley Maritime Corporations has won a tender for services related to the purchase of ships by the U.S. Maritime Administration. Stena RoRo, together with Serco and Life Cycle Engineering, is part of the project team that will be carrying out the assignment. The project will be conducted over a period of several years.