THE CAPTAIN OF THE STENA IMPERO HAS BEEN

The Captain of the Stena Impero – the tanker detained by Iran for 70 days over the summer - has been awarded by British Royalty for his exemplary service and devotion to duty.

Captain P.G Sunil Kumar was awarded the Merchant Navy Medal for Meritorious Service by HRH The Princess Royal at a ceremony in London on Wednesday 6th November. Nominees for the annual award are selected by the UK Government Department for Transport for their positive contribution to the Merchant Navy or fishing fleets of the United Kingdom.

On 19th July 2019, the British-flagged, Swedish-owned Stena Impero was seized by
Iranian forces while legitimately transiting the Strait of Hormuz.

The vessel and crew were forced to sail to Iran where they were held under duress. Seven crew members were released on humanitarian grounds seven weeks later, before the remainder of the crew and vessel were eventually released on 27th September.

Following receipt of his medal, Capt. Sunil said: “It is a great honour to receive this award from HRH The Princess Royal and from the United Kingdom Government Department for Transport. I accept this on behalf of all my fellow crew members who were with me on the Stena Impero. We were all simply doing our job to the best of our ability during an extremely challenging set of circumstances which were out-with our control. I am personally very proud to continue to serve as a Master Mariner within the British Merchant Navy fleet and for Northern Marine Management.”

Philip Fullerton, Managing Director, Northern Marine Group, joined Sunil at the ceremony in London. He said: “On behalf of all at Northern Marine, I congratulate Captain Sunil on his well-deserved recognition from the UK Department for Transport.

“Under Captain Sunil’s leadership, the crew of the Stena Impero displayed exceptional conduct and professionalism during a prolonged period of extreme difficulty and uncertainty.”

Erik Hånell, President & CEO, Stena Bulk added: “I am delighted that Captain Sunil has been awarded the British Merchant Navy Medal for his admirable leadership during the detainment of the Stena Impero.

“The professionalism demonstrated by Captain Sunil during an exceptionally difficult situation is to be commended.” 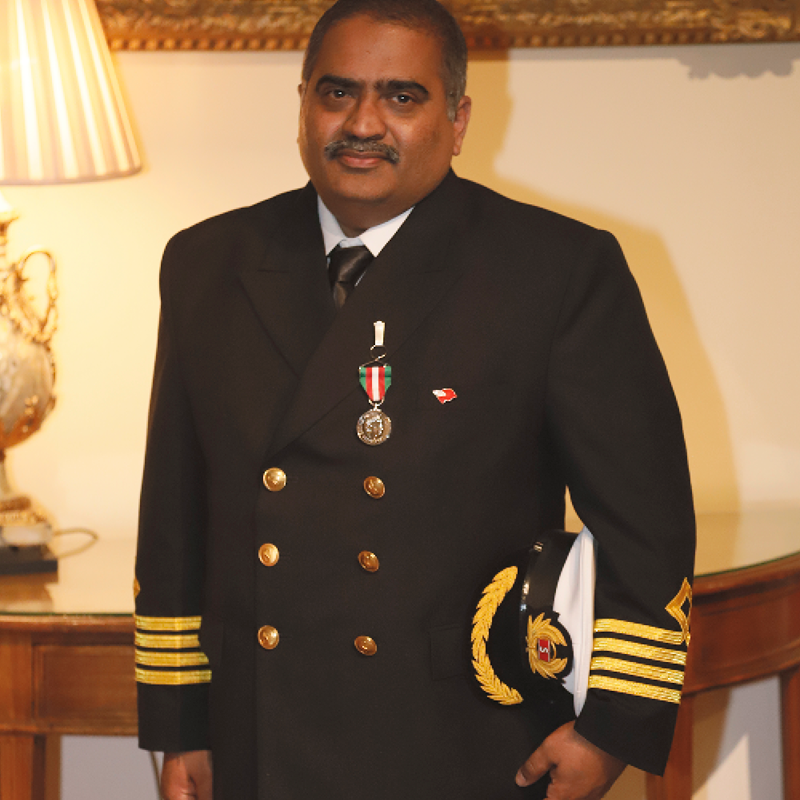 “Sunil demonstrated exceptional leadership and professionalism to maintain both the morale of his crew and the integrity of his vessel, even where that put him at significant personal risk.  His exemplary actions are a reminder of the service of Commonwealth citizens in the Merchant Navy today and throughout its history.”

SHARE THIS ARTICLE:
THANKS FOR READING THIS ARTICLE.
QUESTIONS OR SUGGESTIONS? GET IN TOUCH
TEXT Andrew Gibson    PHOTO Mark Dalton
Northern Marine
December 12, 2019
POSTED BY: Stena

A Virtual Reality training simulator created by Aurora Digital Solutions (a Northern Marine Group company), is aiming to better equip seafarers to execute one of the most hazardous vessel operations in the industry.

As the COVID-19 pandemic continues to significantly affect the global population in ways never experienced before, it is seafarers who have ensured vital global trade continues, with many having to work well beyond their tour of duty.

As part of an ongoing drive to achieve more sustainable and environmentally friendly operations, single-use (throw away) plastics have been removed from Northern Marine’s head office and are being phased out across the Company’s global fleet of managed vessels.

Your connecting flight is unexpectedly cancelled, and you are now stuck in Schiphol Airport. The business meeting is in 4 hours. It is at times like this you need effective and trusted support to guide you onward.